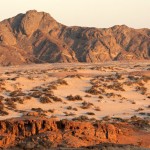 View to the Naukluft Mountains 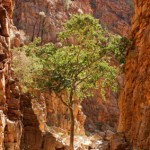 East of Sesriem Canyon are the Naukluft mountains. The mountain range forms part of the so-called Great Escarpment, which separates the coast from the inland highlands. The rugged mountain range rises up to 2000 meters in height. Deep valleys and crystal clear streams create the picturesque image of the Naukluft Mountains. According to geologists, the rock is more than a billion years old. Only guests who make a booking at the campsite may visit the mountains, day visitors can not. The stay in the mountains must be booked from the capital, Windhoek. The maximum stay is three nights.

The region is a hikers paradise as there are various difficulty levels for anyone to tackle. The Olive Trail is a obvious favourite. In a four-to six-hour hike, visitors can experience an impressive and blooming landscape especially after the rainy season. Scorpions and snakes like the rough terrain of the Naukluft Mountains and careful attentiuon should be paid to the creatures that live in the rock face.

The mountains as a retreat for the Nama

The rough terrain of the mountains Naukulft served the Nama Chief Hendrik Witbooi during his three year refuge from the German occupiers in 1891. In 1894 Witbooi was forced to surrender. Some soldiers’ graves in the region are a reminder of the war. Travellers will meet the Namibian hero Witbooi everyday because his face can be seen on the Namibian dollar bills.